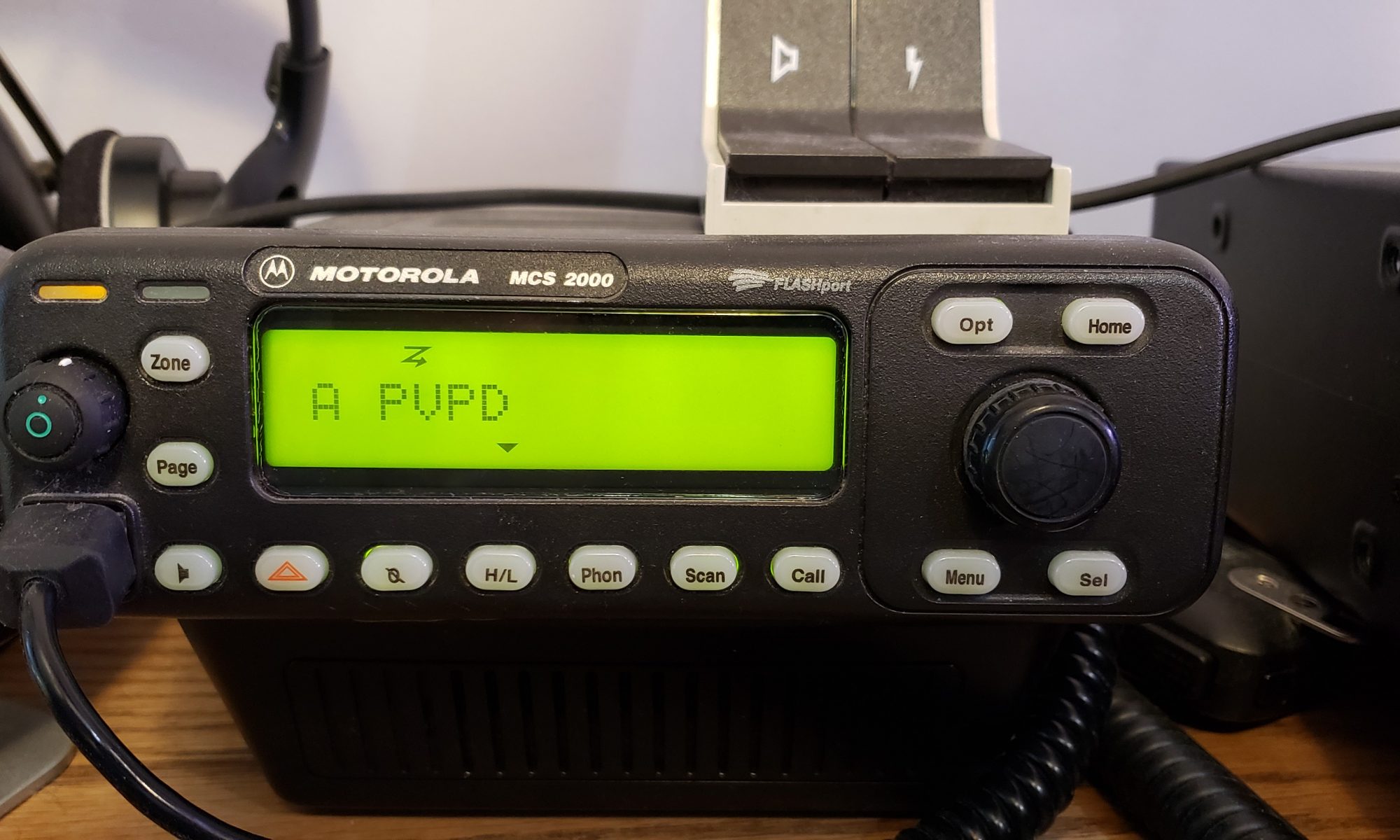 Those who regularly listen to police radio traffic on a scanner in Salem County will likely have noticed that Pennsville Police seem to have disappeared.  A simple programming modification will have you hearing them again in no time.

Pennsville Police have moved to their own radio system.  Scanner listeners will need to have their scanners reprogrammed in order to add this new system if they wish to continue monitoring them.  The good news is that at least for now any scanner already being used to monitor other Salem County agencies should be capable of receiving Pennsville’s new system.  More on that below.

Up until recently, Pennsville Police were using Salem County’s radio system (FCC license WIM276).  “PD West” was their primary channel on a frequency of 501.1625 MHz.  They also used “Channel 2” as a secondary channel on 501.7375 MHz.


On 5/23/2018 the FCC granted Pennsville’s license (callsign WRBQ753) for the new radio system.  I first became aware of the plan to move to this new system in early August.  At that point I started monitoring for traffic in order to map the licensed frequencies to what they were to be used for.  The license covers three repeater pairs (repeated channels) and one low-power channel which I believe to be simplex or talkaround for the police.

By early September of 2018 the police were using the system full-time.  I had also observed one channel being used by the Pennsville Memorial High School.  At the time all users of the system were utilizing digital audio in the form of DMR.

The police had ongoing problems with the new system.  I’ve heard several different explanations as to what the problem(s) may have been.  In order to avoid speculation I won’t go into those here.  What I will say is that based on the current configuration, at least for the police, the problems appear to be related to the digital audio (DMR) aspect of the system.

As a result of the problems they were encountering, the police flip-flopped back and forth between the county system and their new DMR system multiple times.  At the end of March 2019 a customer contacted me saying they hadn’t been hearing Pennsville Police.  I had previously programmed a brand new Uniden BCD536HP digital scanner* (a fantastic scanner) for this customer.  That programming included both the county system and Pennsville’s DMR system.  The fact that the customer was no longer hearing Pennsville’s units made it clear that something had changed.

I hadn’t been monitoring closely enough to notice the absence of traffic from Pennsville, but with that customer’s complaint I did a little more intense monitoring.  It took no time at all to realize what had changed.  Pennsville’s units were again operating on their new frequency, but they had switched back to analog audio.  My suspicion is that they’ve given up trying to get digital audio to work for their use case and have reprogrammed everything to operate on the same (new) frequency with analog FM audio.

This is good news for anyone who wants to monitor Pennsville Police.  While anyone with an existing scanner will need to have it reprogrammed, there is no need for an expensive digital capable scanner, which would have been required had Pennsville stuck with DMR.

What to do to Continue Monitoring Pennsville Police


First off, I want to caution that this change to analog FM audio may or may not be permanent.  They have bounced back and forth between this new system and the county system so many times that it is hard to tell if they’re actually settled in and sticking with analog audio.  That being said, I will note that they’ve been running analog audio full-time for more than a month.  I would also note that moving from DMR to analog audio likely required reprogramming of all radios in the field along with some reconfiguration of the repeater.  The effort required to make such a transition leads me to believe that analog audio is their long term solution.

With all of that out of the way, here’s what you need to do to monitor them again.  If you program your own scanner, simply add their new frequency to your existing programming.  That frequency is 460.2875 MHz.  If your scanner supports entering a PL tone (or CTCSS tone), the tone in use is 136.5 Hz.  Don’t worry if your scanner doesn’t support the tone, or if you can’t figure out how to program it in.  It isn’t required in order to receive their traffic.

I offer programming services in the event that you don’t do your own programming.  I’m located in Pennsville and have been programming scanners locally for over 15 years.  Programming for Salem County typically runs $15 per scanner.  Other areas and agencies can be programmed by request for an additional fee.  Just give me a call at (856) 212-1070 and we can set up an appointment.

Some Final Notes on the New System

As I mentioned earlier, the license lists three repeater pairs and one low-power frequency.  At this point I can only confirm with certainty that the police are using analog FM audio on 460.2875 MHz as their primary channel.  I believe the low-power frequency (458.9125 MHz) is a simplex or talkaround channel for the police.  The second repeater pair was being used by the high school in September of 2018.  At that time they were also using digital audio.  That frequency is 453.6625 MHz.  The school was operating on talkgroup 1, timeslot 1, with a color code of 6.  I’m unsure if they switched to analog when the police did or if they stuck with digital.  Finally, I haven’t seen any traffic to date on the third repeater pair (460.5125 MHz), so I have no idea what it’s use is.  It’s possible that it is reserved for local OEM or as additional capacity for the police.  I’ll work to confirm the details for the low-power and school frequencies and will update this post when I do.  If I ever catch any traffic on that unknown repeater pair I’ll add information about that here as well.

*This is an Amazon affiliate link.  While I do earn commission from sales made through this link the price you pay remains the same.  I appreciate your support.